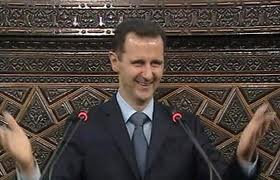 Syrian president Bashar al- Assad had acknowledged that the unrest in his country is a threat to the government and the people of the country. In the first address he was making in two months the president said he will initiate a national dialogue which would be aimed at bringing some changes in the country. He maintained that he will never bow to the people who are protesting to remove him by force. He described them as saboteurs.

The people of the country had been anticipating the speech by the president who is battling to remain in power for about three months of severe protests. The president has been under intense pressure from Turkey, US and European Union countries to carry out reforms in the country to put an end to the protests which is trying to cripple the country.

The president offered to carry out some reforms in the country but the details of how that will come about was not mentioned in the address. What the protesters demand is that President Assad leaves power. It is not yet clear whether the president will agree. The Assad family had been in power for over four decades. There is a one dominant party system of government in the country. It is not yet clear whether the protesters will accept anything outside the resignation of President Assad.