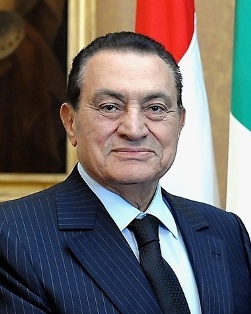 Reports from Eypt indicate that the ousted president Hosni Mubarak is clinically dead. The former autocratic leader suffered a stroke and fell unconscious. He was rushed to hospital from prison where he is serving his jail sentence. Mubarak is surviving on life support devices and is in coma. Suzanne the wife of 84 years old former Egyptian president arrived at the hospital to meet her critically ill husband. News reporters around the world are waiting for confirmation from hospital authorities on the latest condition.

Hosni Mubarak who became the president of Egypt in Ocyober 1981 was ousted after 18 days of demonstrations during the 2011 Egyptian revolution.
Photo Courtesy: Presidenza della Repubblica

During the trial Mubarak’s lawyer Farid el-Deeb defended his client on the grounds of poor health condition. In June 2011, the lawyer revealed that Mr. Mubarak “has stomach cancer, and the cancer is growing.” The expelled President had undergone surgery for cancer in Germany the year prior and also has a medical condition related to circulatory problems with an uneven heart beat.

Conflicting Reports
“Any talk of him being clinically dead is nonsense” said General Said Abbas, a member of the ruling military council. While the military leader acknowledges the fact the Mr. Mubarak had suffered a stroke and fell unconscious, he denied the reports that Hosni Mubarak is dead. Here is a report from Al Jazeera.