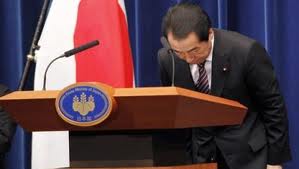 Naoto Kan, Japanese Prime Minister said he would resign after completing almost 15 month in his position. The announcement for resignation has been made in the wake of criticism over Kan’s failure to handle tsunami and nuclear crisis.

The prime minister stated that he would resign from the post of chief of Democratic Party and also quit as premier as soon as the party picks a new replacement after voting. Only 10 percent Japanese believe that the current PM has done a good job in handling the two crisis while 69 percent totally disapproved Kan’s work during an AP-GF survey.

Japan has always experience similar alteration in leadership whenever there was some political, environmental or economic crisis, since World War II.

Survivors of tsunami and nuclear aftermath in Japan are totally disappointed with the government’s failure to mitigate the radiation impacts and check contamination of air, water and food items.

So far, more than 100 thousand people have vacated places nearby the plant and none of them has any idea about when will they be able to return back. The government officials also had the same tone as they stated it might take more time to reduce the accumulated radiation from the affected areas.