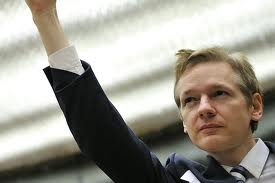 Julian Assange is forced to write down his autobiography to pay his legal bills, he stated. WikiLeaks chief has agreed to a deal of $1.5 million to write his story for a US publisher.

Assange further stated that to keep the website going and pay for the legal battle he is fighting, he needed funds. Most of the banks and paypal have either stopped financial transactions for WikiLeaks or banned Julian Assange and he can not even receive any donation. His visa cards and credit cards have already been cancelled.

The controversial website owner told media that he had already spent $307,400on legal fights and needed money for his survival as well as continue the website. He would also get $796,654 from Alfred A Knopf, his U.S. publisher. Another deal with a British publisher Canongate would give Assange $501,000 And he expects to earn at least $1.5 million by selling the book in international markets.

Assange is living in United Kingdom on bail presently and he is wanted in cases in a Swedish court for charges of sexual assault and rape. Assange and his lawyer have continuously denied all charges and stated that this was a way to silence the controversial media person in reaction to his disclosure of US confidential documents.