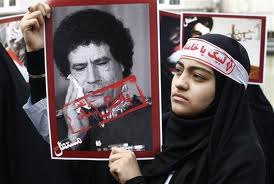 The crisis in libya is taken a new dimension with the rebels who for months have been waging a war to remove Moamar Gadhaffi from power have decided to form a government that is a parallel government in the country.

It is not yet clear whether the efforts to form a parallel government in the country would make the international community to release the Libyan assets that were frozen by the international community. The meeting between the rebels leader and the regional leaders was held in Benghazi. The rebels have been battling to topple Gadhaffi for months now.