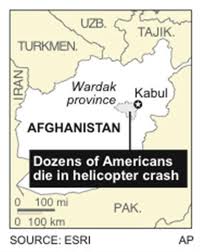 NATO is trying to establish whether the crash of Afghan helicopter occurred after being shot down by the Taliban extremists, which led to 38 deaths. Last two days have witnessed a bloodbath in Afghanistan as four NATO soldiers were killed on Sunday in violent clashes with insurgents, revealed the coalition authorities.

The foreign troops serving in Afghanistan are majorly from the United States and France, located in Kapisa province.

According to the French officials, two French soldiers were killed and five more were wounded in Sunday attack by the insurgents in Kapisa. Rest two soldiers who died in the same attack, have not yet been recognized.

Despite the casualties, French president reiterated country’s determination to cooperate with the International Security Assistance Force (ISAF) to restore peace in Afghanistan. Already, 30 US soldiers were killed in Afghanistan of the Navy’s special force Seal Team 6, which played a key role in killing Al Qaeda.

The Taliban have accepted attacking on the Afghan helicopters and claimed that they attacked it with a grenade which was rocket propelled. The officials, however, also indicated of the possibilities of exaggeration about the incident. Hamid Karzai, the Afghan president declared about the death toll, which was later on confirmed by coalition forces too.