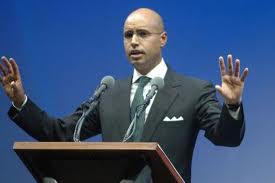 The new government Transitional National Council [TNC] is facing severe critics from the human right activists over its treatment with Gaddafi in the last minutes of his life. The rebels humiliated and hit Gaddafi before shooting him. Saif seeks to fight against TNC supporters accusing them of war crimes. He also asks help from international communities in this regard.

Niger is located in West Africa, where Gaddafi’s son has taken fugitive owning to the support from nomad Tuaregs. However the country is also under pressure to handle Saif to the International Criminal Court as he is also accused of committing war crimes during Gaddafi’s rule in Libya.

Niger, however fears there might be violent protests from Tuaregs if it gives Saif to the ICC.

Libyan rebels have gained severe criticism due to their ill treatment with former dictator Gaddafi, who exploited the country and suppressed people’s freedom for 42 years.

The ICC issued an statement from Hague saying that Saif was interacting with officials to surrender for the trial against him.

However, Saif wanted to be assured for not to be handed over to Libyan rebels who killed his father mercilessly.

Niger has so far not declared officially about presence of Gaddafi’s son within its borders.