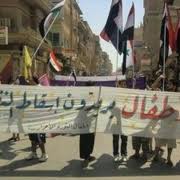 Supporters of Syrians’ fights against autocratic government protested in Khartoum on Friday.for the protesters called on Syrian president, Bashar al-Assad to resign.

The Syrian protests began following the surge of revolution in the Middle East and neighboring countries which led to ouster of many dictators—as in Egypt, Libya and others.

Sudan that has been a good supporter of Syrian president Assad’s main friend Iran, is openly calling on people to demonstrate, In fact, the Sudanese police deliberately allowed protesters to gather and chant slogans against Assad.

The protesters overwhelmingly shouted “Oh Bashar, oh you coward, the Muslims are right here,” and appealed the Syrian president to give in power to the rebels.

Sudanese have strongly favored fundamentalist Muslims and they support Sunni rebels in Syria against autocratic government. Thus their support to Syrian protesters has religious grounds.

Sudanese President Omar al-Bashir gave full support to Libyan rebels in their fight against military dictator Col Mummar Gaddafi, who ruled Libyans ruthlessly for 42 years. However, al-Bashir suppressed anti-government protests in Sudan very diplomatically. Experts predict there might be further protests in Sudan too due to deteriorating economic condition and increasing inflation in the country.

Northern Sudan lost almost all its oil resources following its separation from South Sudan when the later declared freedom in July. Since then, the Khartoum government is facing economic crisis.