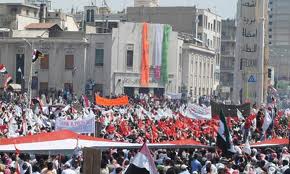 The Syrian unrest turns to a new direction following the reemergence of longtime supporter Russia. President Basar Assads’ regime, which is about to tumble down hopes to survive through the fierce rebel by Syrian people due to this new development despite the fact that a;lmost entire international community is against the regime.

Russia expressed its apprehension for the UN resolution that brings sanctions against Syria. Seeing the casualties, which has exceeded 2600 deaths now, UN stated that government has crossed all limits to suppress the rebellions in Syria in last six months. China too supports Basad’s regime and both Russia and China are permanent members of the United Nations Security Council, who can use veto powers.

Dmitry Medvedev, Russian President stated that any resolution from the United Nations should not be biased against the government and it should target the opposition as well. Medvedev further added that Russia believes that there is no need of approving a tough resolution for taking a tough stand on Syria, rather the international community should take a step to strike a balance between both parties­—Syrian government and the opposition forces to resolve the conflict.