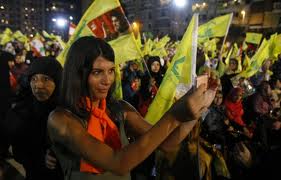 Following the new wave of freedom and fight for democracy which is ravaging the entire Middle East, Tunisians too are busy in their own race toward fair polls.

Voters across entire Tunisia waited desparately in long lines to select their representatives in the hope to establish true democracy in the country for which they have been struggling throughout.

THorugh their posts on Facebook and other social media, the youth of Tunisia has been voicing their demand to elect a new government after fair polls and rewrite their distorted constitution. Voters – The country has a 217-seat assembly.

Political experts and diplomats are predicting that Ennahda, a party that supports moderate Islamic movements, may come on the top in these elections which may bring religious implications in Tunisia, which is otherwise considered almost a secular nation so far.

Zine El-Abidine Ben Ali, who had been ruling Tunisia for last 23 years as a president, was thrown on Jan 14 after an uprising by people of the country. Tunisians were too fade up to bear his long autocratic and corrupt rule which gave them nothing but poverty, unemployment and suppression.

The elections have come up with extremely high turnouts showing the enthusiasm of Tunisians for electing a truly democratic government of their own choice. So far, there have been no conflict or violence during the poll. Tunisia was never expected to explode like this with the waves of revolution due to its usal peace-loving people.

Among the Mediterranean countries, Tunisia is favored by European tourists due to its beautiful sandy beaches and deserts. However, the recent uprising in Tunisia initiated a series of rebels in the entire Middle East that is known as Arab Spring across the world.