Burhan Ghalion, the chief of Syrian National Council [SNC], and who is also leader the protesters demanding Assad’s resignation, stated that he failed to convince Russia to support their struggle. Ghalion was in Moscow for a talk with Russian diplomats.

Instead, Russian leaders asked SNC leader to negotiate with President Assad and stop violent demonstrations. Clashes between Syrian government forces and protesters have caused hundreds of deaths so far.

Last Monday, around 70 people lost their lives in another conflict. Human right activists are strongly opposing violence in Russia.

However, the claims of deaths of civilians can not be verified even as the Syrian government has restricted access to country for foreign media.

According to the United Nations, around 3500 people have died since demonstrations started in Syria calling  President Assad to resign. However, the Syrian government claims the deaths were caused by violence by militant groups.

The Russian government does not support UN Security Council’s criticism against Syria and also flayed the Arab League for suspending Syria’s membership. There was no agreement on any issue between the Syrian opposition leader and Kremlin, revealed Ghalion in Moscow. He further revealed that he felt President Assad’s oppressive government enjoyed full support from the Russian government. 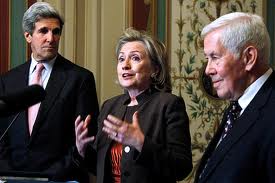 The two nations will implement the new treaty– new Strategic arms reduction treaty (START)  to restrict the number of nuclear weapons they can possess.

Hillary Clinton and Sergei Lavrov traded authorization documents with each other in Germany during a ceremony to enact the treaty.

Clinton stated that the treaty would serve as a “clear-eyed cooperation” for everybody’s interest. The Russian diplomat called it a mean to enhance global stability.

The new deal states that both the nations signing the treaty would limit their nuclear warheads to 1550—reducing 30 percent from the level set in 2002.

Ban Ki-Moon, U.N. chief welcomed the United States and Russia for the step and appreciated the two leaders for taking lead on the issue of reduction of nuclear weapons. The new nuclear weapons reduction deal or START treaty had been approved by the United States Senate earlier in December. Russian Parliament too passed the bill to go ahead with the treaty in the previous month.