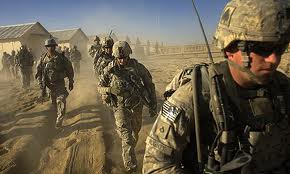 The United States sent its troops to Afghan area near border to Pakistan. According to a report by local media of Pakistan the troops consist heavy artillery and helicopter gunships.

The US military has taken a new position in an area which is adjacent to –insurgent-infested part of North Waziristan. The border also touches Ghulum Khan. The US troops shifted here on last Saturday and Sunday night.

The report also quoted Pakistani authorities and tribal leaders who revealed that US troops have taken position on hilltops from where they can observe the insurgents.

Another sources revealed that the US military also began a door-to-door search in KHost Province of Afghanistan to catch insurgents.

NATO warplanes were also seen across the border, revealed villagers of Ghulam Khan where US forces have also been deployed by now.

US forces’ sudden change in their position has culminated tension in the border area as US military also imposed curfew and banned traffic on main roads that connect border areas— Ghulam Khan of Pakistan and Khost province of Afghanistan.

Government authorities also confirmed this report, said the source. However, there was no confirmation of any such reports by the United States and NATO forces. No media sources from any other country has supported the same.